How we spent Earth Hour... 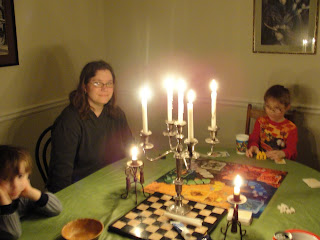 While we may have been one of the few marking Earth Hour in Marietta, GA - mark it we did. My children were enchanted with the candlelight and it generated some good questions about how our power needs affect the planet. Kiernan is great about turning off lights and often reminds me when I am forgetful. He is an empathetic child and he gets upset when thinking about the planet being harmed by his(our) actions.

Earth Hour reminds us that small efforts can make a difference in climate change, sustainability, and raising awareness. This small spiritual exercise of setting aside an hour of time was helpful in giving me food for thought for an upcoming Earth Day sermon. When we are overwhelmed by phrases like 'catastrophic climate change' and 'devastation of rainforests' we often feel powerless. Yet, small changes in our own lives can make a real impact. Think about how much difference it makes on those grocery trips when you remember to bring bags. How many times will we shop in a lifetime? That is how many times we can make a difference in that small way. My youngest son Ehren is mindful of putting all of his yogurt containers in recycling, and small children eat a lot of yogurt, applesauce, and other asundry containered items. Each container that is reused is less that have to be produced - less pollution from that production etc.

This hour was not only about sustainability, it also reminded me about sustainable time with family. In a consumptive and fast paced world it is important to sit down for some actual face time with one another. Not Facebook, face time.

If you were wondering, Kiernan won the board game by a landslide.
Posted by Rev. Julianne Lepp at 5:22 PM No comments: Links to this post

How far does hate go?

Barney Frank, an openly gay senator, is met with gay-hating chants from the Tea Partiers. John Lewis from Georgia is met with the N word, and another representative was spit upon. The discourse on healthcare and politics in general has devolved into hateful name calling and dehumanization.

How far does hate go?

President Obama is featured in a dehumanizing clown face. The taunt rings out, "You lie!" People are yelling down folks at community meetings...

It won't be long before the hate breeds more than violent words. This sort of de-evolution of the ability to communicate with respect is the sort of de-humanizing banter that was the stuff of Civil Rights battles. We can not have civil society if people will not act civil. It takes a great deal of cooperation to have democratic process and to hear one another.

I'm afraid I can't hear much over all the shouting.
Posted by Rev. Julianne Lepp at 6:56 PM 1 comment: Links to this post

Standing on the Side of Love at Candler School of Theology 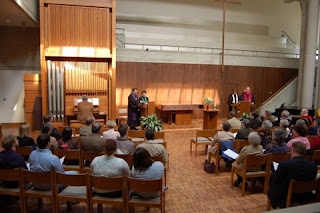 At Candler School of Theology myself and fellow UU students have formed a Unitarian Universalist Student association. To be recognized, one often needs to organize and unify the efforts and action of individuals. We wanted to establish our presence at Candler and set a precedent of welcoming for future UU seminarians. Though some of us have sang in choir and attended Chapel, there has not been a Unitarian Universalist Service at Candler's chapel since 1992. We saw this as something that needed to be corrected.

The central theme of Universalism calls to a loving God that would not condemn her creation to be separated from fundamental reconciliation with the divine. Unitarian Francis David said "That we must not think alike to love alike!" There is a strong history in both strands of standing up for the rights of slaves, workers, and women.

We had this service on March 18th in Canon Chapel with local UU's attending, along with a good number Candler seminary students and professors. The service was split between students and primarily local clergy graduates from Candler. Myself and a graduate, Lynn Hopkins, did a reflection. Rev. Marti Keller did the central homily and called us to understand our connection to standing up in the face of violence. The convicted voices of Rev. Rhett Butler, Rev. Joan Armstrong, and Rev. Roy Reynolds rang out in the meditation, chalice lighting, and call to worship. Duncan Teague, a current student, sent us off with the holding of hands and hearts. We emphasized our heretical UU history that has always puts always on the leading edge of questioning and standing on the side of justice. We spoke to our spirituality of interconnectedness and the irrefutable human and spiritual connection that calls us to stand up and out. There was a rich connection between the Unitarian Universalist Congregation of Atlanta and its history of racial justice and ties to Martin Luther King, Jr.

We sang Spirit of Life and of course, Standing on the Side of Love. I was proud at how many of my fellow students raised their hands, when I asked if there were other heretics in the Chapel. We built a bridge with that service, and hopefully a relationship in justice and love.
Posted by Rev. Julianne Lepp at 7:08 AM No comments: Links to this post

Email ThisBlogThis!Share to TwitterShare to FacebookShare to Pinterest
Labels: Standing on the Side of Love, UU service

It is important for me as a parent to involve my children in activism that embodies our Unitarian Universalist values. Both my boys have been thrilled to participate in marches, protests, and supply drives. They like to make their own signs and of course being outside singing and chanting is fun for small children. Yet, I want them to move into the deeper reasons we act from our hearts. It goes beyond a cause and into the basic human relationship that is between each human being. I want them to grasp this feeling of a shared humanity and the shared experience of this finite existence. Kiernan said to me this morning, "I'm really sorry that people are cold in Atlanta. I wish the homeless didn't have to be cold." He is glad to do something concrete for what sometimes seems to be an insurmountable problem of poverty and homeless. This is basic compassion, but I'm so glad that it crosses his mind to think of others.

Kiernan is continuing to work on a community service badge for Sprial Scouts in collecting items for the homeless.

Atlanta Homeless suffer from poor foot care due to lack of socks and proper shoes. We'd like to collect clean socks of all sizes to donate to Crossroads Community Ministries where I was a Chaplain last summer. When you stand or walk in the heat, it is important to have clean dry socks.

We are collecting clean socks, shoes, and backpacks this week. It is my Spring Break, so I have flexibility for pick up. Pass the word!
Posted by Rev. Julianne Lepp at 9:02 AM No comments: Links to this post