Standing on the Side of Love In Madison 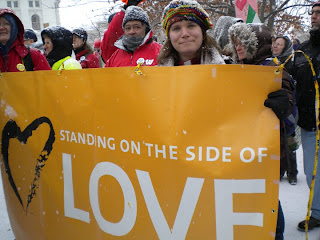 On Saturday February 26th I drove up to Madison with a fellow minister from Eau Claire. We were travelling to meet other clergy to lend a faithful voice to the protests against Governor Walker's "Budget Repair Bill." We arrived to the streets filled with signs and energy. We missed our rendezvous with the other clergy that were starting the march, because there was no where to park. Eventually we took refuge in a church parking lot with the hope that they would faithfully not tow us! We wandered past a great diversity of protestors winding their way through the streets up towards the Capitol.

I have been a part of many different protests, but this was by far the largest. There are estimates that the crowds reached between 75,000 and 100,000. Yet in those crowds we were able to find our fellow clergy. I also found a fellow UU from a Madison church and this is how I came to hold our slogan sign of "Standing on the Side of Love." There were fireman, teachers, janitors, and artists. There were children, college students, and clergy. A diversity of voices rose that Saturday in the falling snow. It was a moving experience to be united in the demand for justice. It was a moving experience to see the peaceful way that my fellow protestors treated one another.

Justice with dignity and truth is faithful. We have to keep being faithful. We have to keep standing, shouting, and singing with our brothers and sisters. This is not about a budget. This about busting the rights of workers and not coming to the table. When you are talking about families, jobs, and education it can not be a zero sum game. There is too much to lose. There is too much to fight for.
Posted by Rev. Julianne Lepp at 6:48 PM No comments:

Email ThisBlogThis!Share to TwitterShare to FacebookShare to Pinterest
Labels: Madison, Standing on the Side of Love
Newer Posts Older Posts Home
Subscribe to: Posts (Atom)