Looks like it will be Hello Eau Claire! I was happy to accept their call to be a full-time settled minister with a vote of 100%!

Time to rest.
Time to pack!
Posted by Rev. Julianne Lepp at 7:47 AM 1 comment: Links to this post

Saturday morning my family and I will hauling ourselves out for a 7AM flight to....Eau Claire(www.uucec.org)! I'm very excited to be candidating for ministry this coming week in lovely Eau Claire, WI. There will be sunny skies and no to little humidity. Take that Atlanta!

Departures and arrivals are in my future, and that has joy and sadness all mixed together. Transitions are liminal times creating a need to look out for guideposts and solid surfaces. I have had a series of goodbyes at my internship congregation, from my home congregation,and from fellow seminary students. Somehow though I keep running into people unexpectedly and more people have been telling me what a wonderful place Eau Claire and the Midwest are to live. I feel very much like the Beatle's song, "Hello, Goodbye!" On that note - I'm excited to be doing a "Beatles Theology" for perhaps my last sermon at UUMAN(www.uuman.org) in perhaps a great while. What Would John (Lennon) Do? 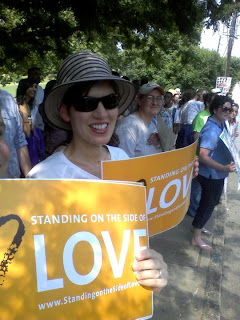 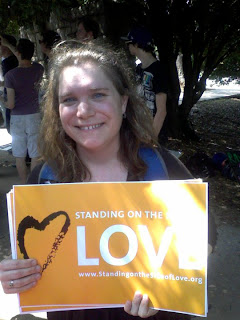 Piedmont park was covered with something besides pollen today. Youths, parents, and activists marched, sang, and supported the gay and Jewish community with signs saying "God loves Glitter" and "Peace, Love, and Tolerance." Of course, we had our Standing on the Side of Love signs! Fellow seminary students carried signs saying "God is love!"

This afternoon a lot of teens from Grady High School in Atlanta and community activists converged into a wonderful counter-witness to the hate-filled messages of Westboro Baptist Church. The church members had horrible signs, "God Hates Jews", "Fags Hate God", and other horrible language. A youth from Grady High School found out that Westboro would be protesting at their school so she helped to organize a counter-protest. Over 800 people responded on Facebook and there were hundreds that came.

We took this moment to bring our Standing on the Side of Love signs and join other faith groups, local teens, and activist in a peaceful witness to love. I really enjoyed meeting some of the parents of the high schoolers that spoke supportively of teen efforts to organize and get their message out. One parent said, "How can I not support my daughter, when she is supporting two friends that came out in high school." This may have been the first protest for many of these teens and they conducted themselves with good spirit and peaceful enthusiasm despite the hateful message they were protesting.

It was a great day to see the power of all ages and types of people coming together in spite of hate. It was a testament to the power of people gathered in the name of love. Even the police doing crowd control couldn't help smiling a little.
Posted by Rev. Julianne Lepp at 5:15 PM 2 comments: Links to this post

Email ThisBlogThis!Share to TwitterShare to FacebookShare to Pinterest
Labels: protest, Standing on the Side of Love, youth
Newer Posts Older Posts Home
Subscribe to: Posts (Atom)